Widening participation in HE: when aspirations are not enough

By Lucia Rizzica (Bank of Italy)

In the UK, as in most other developed countries, the substantial increase in participation in higher education observed during the past three decades, has been accompanied by an increase in inequality in access. Indeed, the rate of participation of those coming from more affluent families grew much more than that of those coming from poorer backgrounds. Coupled with the substantial raise in the returns to higher education, this generated a significant exacerbation of within generation inequality.

Since the late 90s’ the UK has been trying to reverse this trend not just through the institution of loans and grants for students from low income families, but also through action aimed at removing some relevant non-financial barriers, namely aspirational ones. The Widening Participation (WP) policy, started in 1998, today receives over 350 million pounds per year of public funds to inspire youths from low socio economic background to go to university. My recent study evaluates the effectiveness of this policy among students who were in high school between 2004 and 2008.

My findings show that the WP policy succeeded in raising the aspirations of students eligible for the programme, and also positively impacted their likeliness to stay on at school. But this did not translate into an increase in college enrollment, except for those from the most affluent families.

The WP policy was initiated after the release, in 1997, of the Dearing and the Kennedy reports, which called for the need to “widen rather than just increase participation in higher education”, thus establishing that Higher Education Institutions (HEIs) should put in place action to recruit and retain students from under-represented categories. These were identified according to different criteria: some HEIs targeted pupils in state schools, some focused on first generation entrants, some considered only children eligible for free school meals.

But from 2004/2005 the Government adopted a specifically designed classification system by which WP target students would be those living in a census ward in which the rate of youth participation in higher education, as of 2001, was within the two lowest quintiles. HEIs were then called to design a WP agenda of outreach activities for these students. The most typical and effective activities, according to a recent study,[1] were summer schools, open days with taster sessions and master classes, and meetings with “students ambassadors”. As a reward for their efforts in recruiting students from under-represented groups Higher Education Institutions would receive funds in proportion to the number of WP target students enrolled.

Using data from the Longitudinal Study of Young People in England (LSYPE) and from the Labour Force Survey (LFS), my paper assesses the effectiveness of the WP policy on three outcomes: educational aspirations, as elicited from a question in the LSYPE which asks pupils to state if they are likely to apply to higher education; full time education continuation rate at age 16; and enrollment in higher education at age 18. The strategy adopted to identify the effect of the policy on these outcomes consists in comparing individuals living in wards which are just below the second quintile of the 2001 youth participation rate distribution (WP target students), with those who are just above and thus not targeted (Sharp Regression Discontinuity). See figures 1-3.

The results obtained show that: eligibility to WP policy effectively increased the aspirations towards higher education of the target students, whose stated likelihood of going to university rose from 52.7% to 57.2% (fig. 1.a); this increase in aspirations was translated into an increase between 3.2 and 4.5 percentage points in the share of students who stayed on in education after the compulsory school leaving age of 16 (fig. 1.b); but the final effect of the policy on college enrolment was negligible on average (fig. 1.c) but significantly positive on students coming from most affluent families. Finally, when exploring possible heterogeneity in the effectiveness of the policy depending on the level of pre-accumulated skills (KS2 scores), no significant differences are detected.

Figure 1.a Effect of WP on students’ aspirations

Figure 1.b Effect of WP on staying on rates 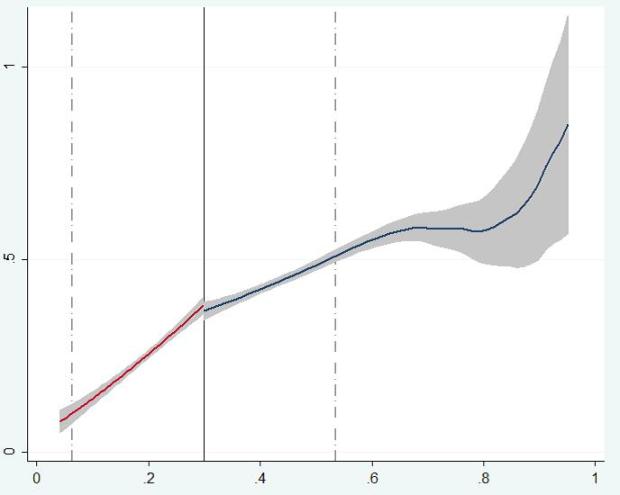 The significant rise in aspirations and decrease in school drop-out rates at 16 generated by the Widening Participation policy seem to suggest that there is scope for policy makers to increase participation in higher education among teenagers from disadvantaged backgrounds by “manipulating” their aspirations. The fact that there are no differences depending on the level of pre-accumulated skills would also suggest that aspirations, as a special type of non-cognitive skill, can at least partially substitute for cognitive skills. On the other hand low family income remains a primary obstacle to higher education entry, so that an optimal widening participation policy would need not just to “inspire” teenagers from a low socio-economic status, but also ensure that they are able to translate these aspirations into university participation.